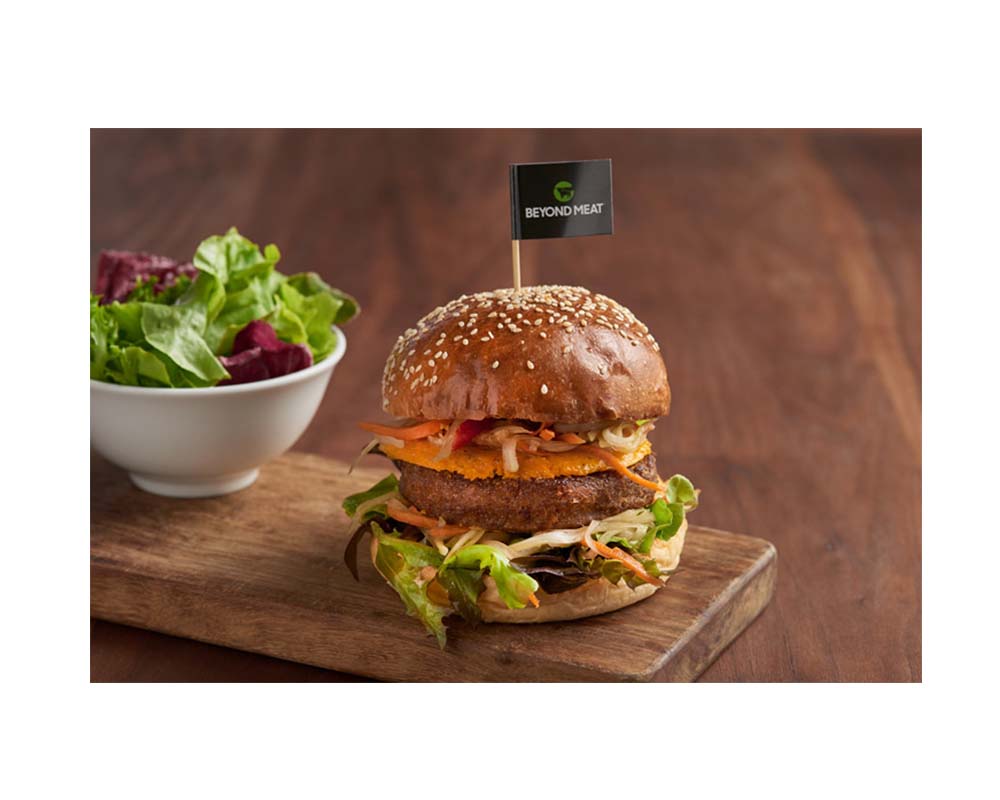 Thailand Tatler sits down with the CEO of Green Monday to talk going plant-based, advocacy and the future of food

Last month, I went to the Grand Hyatt Erawan to interview David Yeung, founder of the highly successful Green Monday, for the social venture’s launch in Thailand and instead, it started with him asking me about my choice to go vegan.

“I went vegan in 2014,” I said. I was living alone in Tokyo at the time, and the solitude created a mental space for me to be able to unravel some of the cognitive dissonance I was carrying about my lifestyle and my concern for the environment. The truth is I didn’t remain faithfully vegan from then until now. Admittedly, when I moved back to Bangkok, where I wasn’t alone, where I am surrounded by family and friends who want the best for my well being and towards whom I feel grengjai, it was hard for me to take the hardline. So, I compromised and sided with vegetarianism for a couple of years before finally gaining the self-esteem to return to my original stance two years ago.

David nods and smiles at my story. “That Asian family concern,” he chimes empathetically. David himself has been vegetarian for 18 years and eats vegan most of the time. “I don’t do dairy,” he says. “The only thing that is preventing me from being completely vegan is the occasional egg.”

His long-time commitment comes from a universal value of compassion. “No life wants to be harmed. That was just very clear to me at a young age.” What was the tipping point, though, from going from personal lifestyle choice to full-blown global activism, I wondered.

“One of the triggers after I went vegetarian in 2001 was in 2006, when I watched the Al Gore documentary An Inconvenient Truth. The second one was reading the United Nations reports from the IPCC—the Intergovernmental Panel on Climate Change. It said two things: One, that climate change was a big problem, and two, that meat and livestock were major culprits for carbon emission.

Here are just some of the facts: Livestock farming generates about 18 per cent of greenhouse gas emissions worldwide. This is more than all emissions from ships, planes, trucks, cars and all other transport combined. Greenhouse gas emissions aren’t the only issue either. Meat and dairy, which provide only 18 per cent of our calories and 37 per cent of our protein, uses up over 80 per cent of the world’s farmland, the allocation of which is the leading cause of mass wildlife extinction. Alternatively, if we were to replace meat agriculture with plant agriculture of equivalent nourishment, we would be able to reduce about 75 per cent of global farmland while still feeding the world. Hence, the headline you’ve all probably seen: Avoiding meat and dairy is the single biggest way to reduce your impact on Earth.

“No life wants to be harmed. That was just very clear to me at a young age.”
— David Yeung

“After that, I became like a one-man missionary,” says David. “When I eat with people, I want to eat with people. I would try to say, ‘hey, maybe you should try to cut down a little bit. It’s good for the planet,” and they would look at me like I’m an alien.”

David continued on for six years until he decided to change tactics and start a venture business platform to tackle the global issue.

“We started Green Monday back in 2012. In the early years, people thought we were crazy. A venture business platform just to tell people to eat more vegetarian? And I wasn’t just doing this one day out of the week or part time. I dropped my other business and my family business and deep-dived into this. No reservations.”

The aim was to create a movement by creating a platform, one that is inclusive and accessible.

“You can’t expect people to go from zero to a hundred overnight. The most important thing about Green Monday is that it’s actionable. One day of the week, go plant-based. Secondly, it’s actionable with a group of people.”

In addition to creating awareness through digital platforms, Green Monday works directly with companies and schools to change the ratio of plant-based offerings in canteens, cafeterias and restaurants and encourage socially responsible and healthier ecosystems. David also founded Green Common in Hong Kong, a place where people can find the tools they need to live and eat more green, including meat substitutions like Green Monday’s own Omnipork.

“You can’t just say, ‘take this out, take that out, don’t eat shrimp, don’t eat pork, don’t eat chicken.’ You have to empower people with solutions.”

“You can’t expect people to go from zero to a hundred overnight. The most important thing about Green Monday is that it’s actionable.”

Today, in Hong Kong where Green Monday started, it’s hard to find someone who hasn’t heard of the movement. Twenty-five per cent of Hong Kong’s population identify as flexitarian, meaning a quarter of the people are actively reducing meat in their diets. Seven years ago, before David started his company, only five per cent were open to going vegetarian at least once a week.

Hong Kong is swiftly joining the ranks of cities like LA, London and Melbourne in terms of vegetarian-friendliness. Mainstream chains like Fairwood, which has over a hundred outlets, and famous Hong Kong-style delis like Tsui Wah have all added substantial meatless meals to their menus, not to mention the number of five-star hotels and Michelin restaurants in Hong Kong that are prepared to service any vegan or vegetarian who walks through their doors.

The pattern of awareness, acceptance and adoption has been the same in countries Green Monday has since launched in—Singapore and Taiwan—and they’re confident that the same will happen in Thailand. Because like David, Thailand is Buddhist. Compassion, karma and merit-making are at the core of our culture and the unwavering popularity of the recently concluded Jay festival is only strong evidence that we already have some form of Green Monday ingrained here. What David simply wants to introduce is more innovation.

Omnipork, or Omnimeat as it’s branded here, works very well for Thai cuisine. Pork, in all its forms, beats out beef and chicken as the most common meat in Thai cuisine, whether it’s our famous Northeastern cuisine, noodles or even street skewers. Working with experts in food science, Green Monday has developed a fully plant-based meat that is practically indistinguishable from real pork in terms of texture, flavour profile and even cooking application. Indeed, Omnimeat, which is made of pea protein, shitake mushroom and rice, is so convincing, it looks like raw meat in the package and transforms just like the real thing in the pan. As for taste, let’s just say that Omnimeat would have Breaking Bad’s Jesse Pinkman exclaiming “Science, bitch!”

At the same time, Omnimeat is actually a superior product when it comes to health. Packing more iron and calcium and less cholesterol, fats and calories than real meat, it also contains no hormones, antibiotics or risk of the rising epidemic of swine disease.

In addition to Omnimeat, Green Monday is also the distributor for Beyond Meat in Thailand, which has already begun to infiltrate the most mainstream food outlets. Being able to be vegan at a Sizzlers without relying on just the salad bar is truly the sign of our times.

David’s ultimate goal, however, is for Green Monday to trickle down to older and more traditional diners in the country—the way it has in the countries before us:

“Frankly, I don’t think this is a goal that is too ambitious at all. We’re just in the beginning with the first batch of restaurants in Thailand, but it’s been proven in Hong Kong, Singapore and Taiwan that once it’s introduced, more and more outlets will realise that this is a global issue and that the new generation of customers are actually very ready for change. This is truly the future of food.”