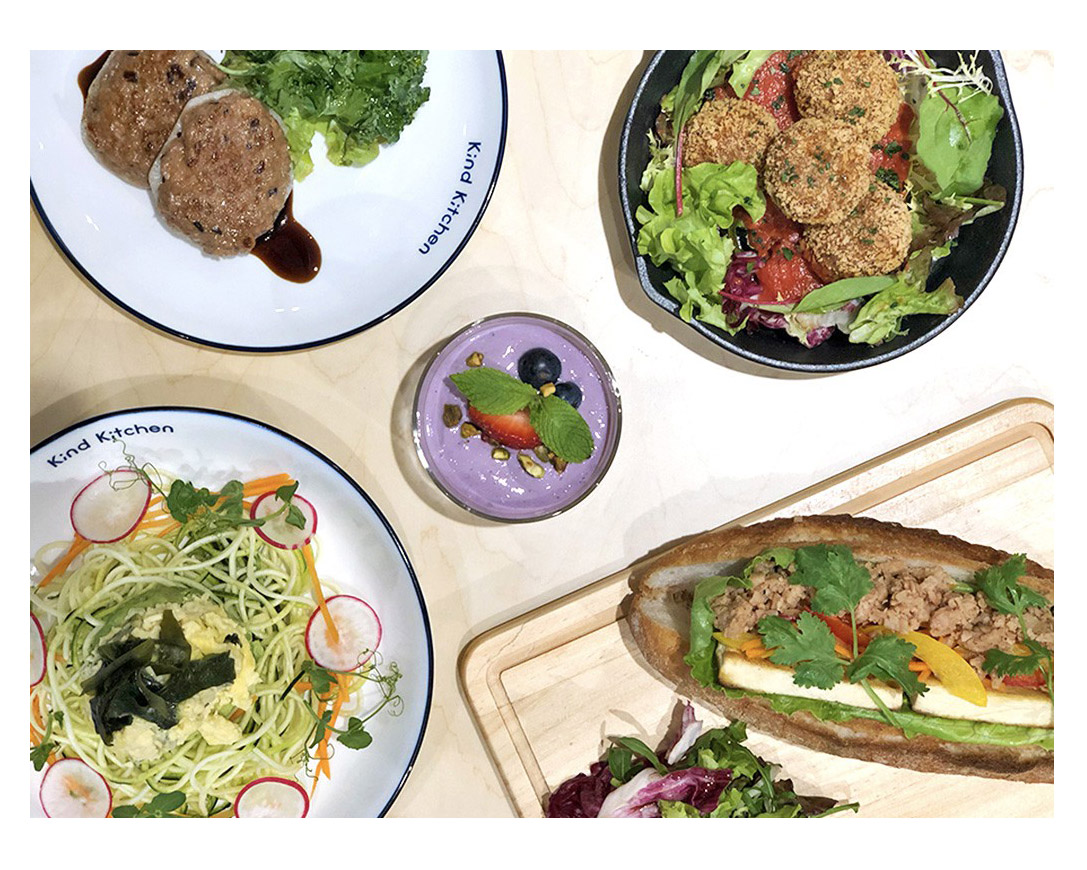 The menu’s focal point belongs to Omnipork, an all-purpose pork showcased earlier this year with a high nutritional profile that looks, cooks, and tastes like conventional ground pork. Kind Kitchen’s signature appetizer favorites will surely include the tasty golden, deep-fried Omnipork meatballs, pan-fried stuffed Omnipork lotus patty, and Kind Gyoza, an interpretation of the popular Japanese dumplings. Omnipork main course highlights include the Future Banh Mi, mixing together the pork analog with vegan fish sauce from Australia, the White Dragon Ramen, a soymilk and miso soup base (so good!) with tofu, lotus root, seasonal vegetables and white sesame; and our personal favorite, the Omnipork Tan Tan Noodle, made with soymilk and chili sauce for a strikingly similar resemblance to the real thing!

Other must tries: the zoodles (zucchini noodles) with avocado and JUST Scramble (addictive), the Beetroot Walnut Risotto with walnuts, tofu and asparagus and the tofu pudding made with agave nectar and two versions of the Beyond Meat burger: the Deluxe (with truffle mayo) and the Delight (with shredded cabbage and apple sauce).

Transforming the former cruelty-free cooking studio and combining the old stomping grounds of Future Bar and OVOCAFE, Kind Kitchen is spacious and luminous, drenched in natural sunlight over a room full pastel pink and blue hued dine-in seats. A designated space for demos and future product launches  can still be found on premises. Designed by award-winning interior design and architecture firm, EDITECTURE, the full service restaurant radiates warmth and comfort with walls decorated in uplifting, meaningful messages. With over a 100 seats and a private VIP room available for booking, this hub of delicious eats will make this Central stunner a destination for anyone and everyone, not least of all passionate plant-based folk.

Kind Kids & Mini Common: Vegan Eats For The Little Ones

The second restaurant in Hong Kong to devote an entire menu to vegan eats for little ones, which will be great news for conscious parents, especially following the abrupt departure of our former beloved HOME – Eat To Live. The kids menu at Kind Kitchen is full of favorites. From Omnipork Spaghetti Bolognese to vegan Mac n Cheese with mashed veggies and cashew, a mini child-sized version of the White Dragon Ramen to carrot and beetroot veggie muffins, each set comes with mini sweet potatoes and a healthy drink.

Right next door at Green Common, a brand new kids section aptly titled Mini Common, decked out in an immersive playstation where kids can learn about food to create a healthier generation of plant-based eaters. With tiny trollies, kid-friendly recipes for your kids to shop alongside you, Kind Kitchen and Green Common is sure to be the ultimate one-stop shop to stay happy and healthy all year round.