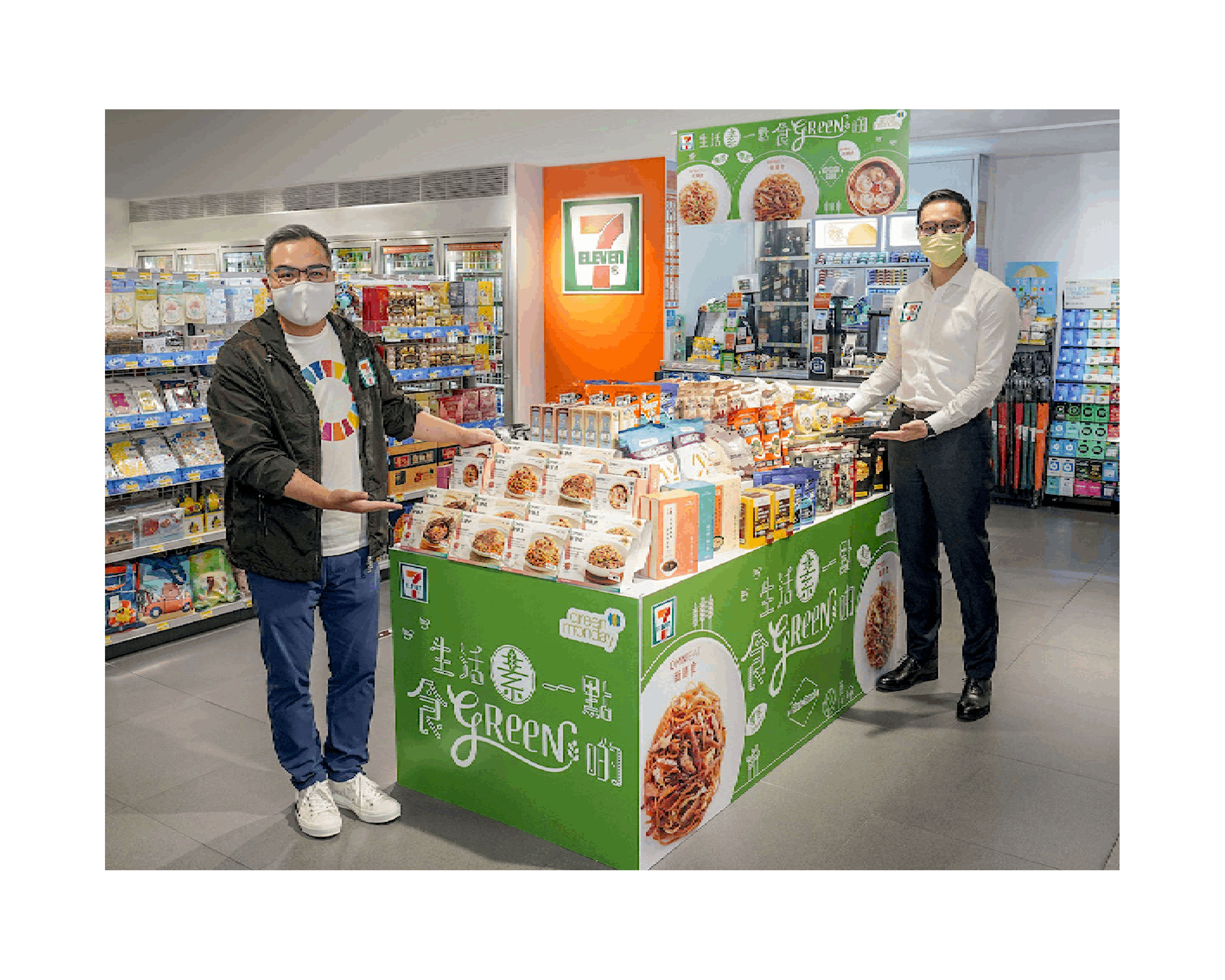 7-Eleven, the biggest convenience chain in Hong Kong, has announced the launch of a new range of vegan ready meals across its over 700 stores in the city in the latest bid to make plant-based eating more accessible to consumers. Partnering with Green Monday, the Hong Kong-based group behind the much-loved plant-based alternative OmniPork, 7-Eleven says the range will include two exclusive new vegan ready meals, as well as dim sum and more than 30 plant-based snacks and beverages that will debut in 150 stores.

7-Eleven has just expanded its plant-based range, after initially rolling out vegan ready meals across for the first time in Hong Kong in October last year with Green Monday, the chain revealed on Wednesday (February 24). Working with Green Monday again this time, Hong Kong’s largest convenience chain says that there will be new vegan ready meals on offer, which will be exclusively available in its over 700 brick-and-mortar locations as well as on food delivery giant Deliveroo.

7-Eleven has revealed that these include Omnipork Strip Spaghetti in Black Pepper Sauce and OmniPork Strip Rice Vermicelli with Sesame in Teriyaki Sauce, both retailing at HK$28 (US$3.61) – at price parity with the chain’s stock of meat-laden ready meal options. Packaged in biodegradable and certified home compostable containers made with bagasse pulp material, these meals can be reheated within minutes in the microwave in the convenience store, a go-to budget-friendly option for many of Hong Kong’s time-pressed workers.

“Now everyone can enjoy plant-based food quickly and easily, at home or at the office,” Alex Liu, Managing Director, 7-Eleven Hong Kong and Macau.

“Finding tasty plant-based food conveniently and around the clock can still be a challenge. Our extensive store network and the fact we’re open 24 hours enables us to meet our customers’ needs and offer them plant-based options anytime, anywhere,” commented Alex Liu, managing director of 7-Eleven Hong Kong and Macau.

“We are also adding plant-based options to our menu on Deliveroo. So now everyone can enjoy plant-based food quickly and easily, at home or at the office,” Liu added.

At a launch event for local media on Wednesday (February 23), Liu further told Green Queen Media that this expansion of plant-based meals, snacks and drinks was the result of the success of the two OmniEat SKUs launch in October, sharing that sales and demand for the plant-based ready meals were “very encouraging”, particularly amongst their stores located in housing estates, where “busy housewives were looking for healthy dishes” that they could easily prepare after work.

OmniFoods’ line of plant-based meat alternatives are primarily made from non-GMO soy protein, pea protein, shiitake mushrooms and rice, coming at a fraction of the carbon footprint compared to its animal-based counterparts.

In addition, 7-Eleven says that vegan, cholesterol-free and low-carbon versions of other classic Cantonese snacks will now be available in stores, including OmniEat Siu Mai and OmniEat Crystal Dumplings, both sold for an affordable HK$18 (US$2.32).

The chain’s plant-based options for beverages and ambient snacks will also be expanded across 150 of its stores, with Green Common vegan soups and porridges, Califia Farms oat milk drinks, Bite Society vegan chocolate, Eat’s Better protein-rich cookies and Simply 7 crisps among the over 30 items expected  to land on shelves. There will also be vegan-friendly instant noodles – a staple for many Hongkongers – coming in various flavours like mapo tofu, tom yum, shiitake mushroom and soybean.

Though there was one caveat, that being quality. “No matter what products we feature, quality, especially taste and deliciousness is the key factor,” said Liu.

The move by 7-Eleven is yet another step in the direction of making plant-based eating more accessible and convenient for Hong Kong consumers, at a time when mainstream demand is steadily on the rise, ever since the coronavirus highlighted the food safety and sustainability issues associated with the meat supply chain.

“We hope that this partnership with 7-Eleven, Hong Kong’s largest convenience store chain, will have a positive impact on promoting a plant-based lifestyle,” David Yeung, Founder & CEO, Green Monday.

A survey conducted last year showed almost a quarter of the city’s population are now actively looking to reduce their meat intake as a result of the pandemic, while a more recent poll also highlighted growing animal welfare concerns as a major factor fuelling the rise of plant-based eating and flexitarianism in the city.

In response to the demand, 7-Eleven isn’t the only QSR now choosing to partner with Green Monday to reinvent their offerings, the latest being Crystal Jade, the iconic Shanghainese dumpling and noodle restaurant who launched a brand new green menu featuring fifteen meatless dishes made with OmniPork, Beyond Meat and Heura.

Commenting on its latest partnership with 7-Eleven, David Yeung, founder and CEO of Green Monday, said: “As a pioneer of plant-based food in Asia, Green Monday has always been committed to promoting environmentally friendly, sustainable food and developing innovative vegetarian products. We hope that this partnership with 7-Eleven, Hong Kong’s largest convenience store chain, will have a positive impact on promoting a plant-based lifestyle.”