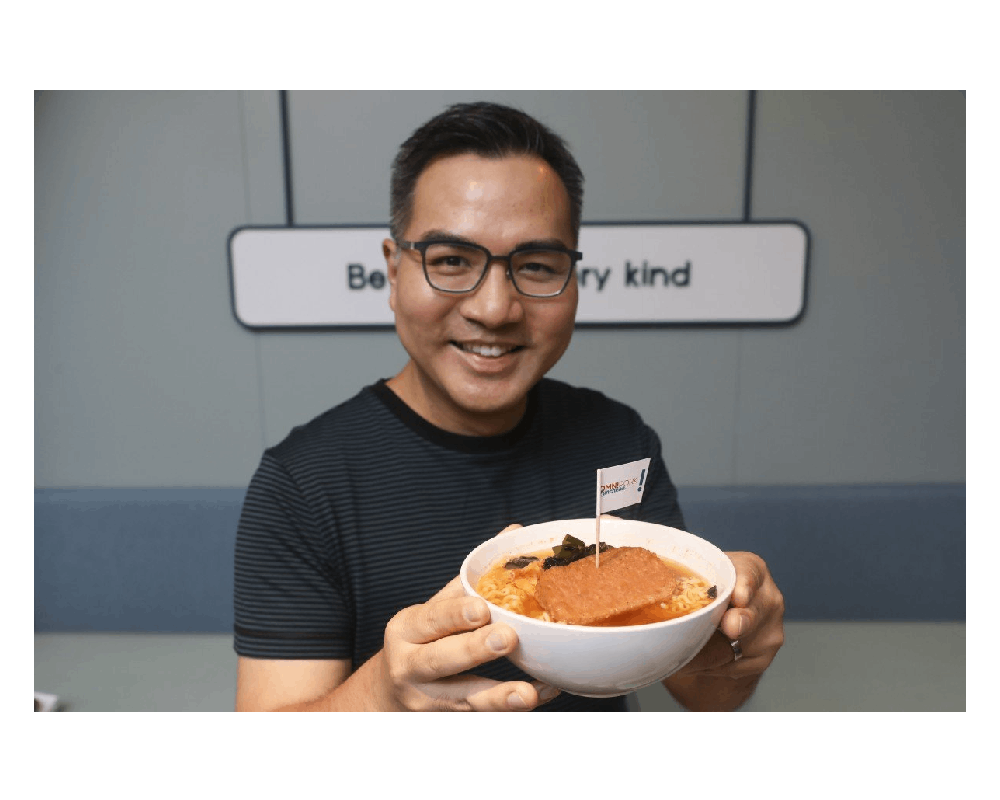 Vegan launches healthy version of his childhood favourite:’luncheon meat’ that almost made him cry

Almost 20 years after adopting a vegan lifestyle, David Yeung again tucked into one of his favourite childhood dishes – instant noodles with luncheon meat. This version of “meat” was plant-based, but just as tasty.

“When I bit into it I almost cried,” he recalls with a laugh. “This is highly related to our childhood memory, our Hongkongers’ way of living, luncheon meat with egg and noodles.”

Following the launch two years ago of Omnipork, a plant-based alternative to minced pork, Yeung, the founder of Green Monday Group, launched Omnipork Luncheon and Omnipork Strip on May 18 at Cordis Hong Kong in Mong Kok.

Omnipork Luncheon looks like the perennial American icon Spam, rectangular with rounded edges. After it is pan-fried, its texture is texture to luncheon meat, though the taste is on the bland side. The same could be said for Omnipork Strip, thin slices of “pork” which look like the real thing. The two products are presented on a bed of deep-fried noodles, or mixed with braised vermicelli.

Compared to regular luncheon meat, the vegan version has 40 per cent fewer calories, 49 per cent less fat and 62 per cent less sodium. And it does not contain nitrates, added preservatives, hormones, antibiotics or cholesterol.
“From just a personal, emotional standpoint, from a craving standpoint, and a real market demand standpoint, we knew that luncheon meat had to be on the list [of products to develop], we didn’t know how difficult it would be and how long it would take, but it was high on the priority list,” says Yeung.

It is classified as a substance capable of causing cancer, the World Health Organisation has labelled luncheon meat as a Class 1 carcinogen and suggests that eating one slice per day increases the risk of colorectal cancer by 18 per cent.

“In a funny way luncheon meat is the ultimate example that when we consume we are illogical and emotional people, and despite data and science, no matter how convincing they are, our craving [for luncheon meat] still comes first,” says Yeung.

When I bit into it I almost cried. This is highly related to our childhood memory, our Hongkongers’ way of living, luncheon meat with egg and noodles

David Yeung, Green Monday group
“If plant-based food can meet the degree of craving with a much higher health and environmental composition, then it’s the ultimate win-win-win.”

Originally the products’ launch was scheduled for Earth Day, April 22, but it was delayed due to the coronavirus pandemic. Ironically, the global spread of the virus that was first reported in Wuhan, China, in late December, is associated with a 264 per cent jump in the sales of plant-based meat alternatives in the United States in a nine-week period ending May 2 that Nielsen reported. The pandemic has exposed weaknesses in the meat industry, with more than 10,000 meat-processing plant workers in the US having contracted Covid-19 or been exposed to it, and at least 30 deaths related to complications from the virus.

No one could have predicted this even 10 weeks ago, nor that the pandemic would have actually helped the plant-based industry to leap forward, Yeung says. “But the reality is these ‘black swan’ events are technically not unpredictable. In the case of infectious diseases transmitted from animals to humans, that has happened time after time after time. But this time, it became a full-blown disaster globally.”
“No one wants this kind of global pandemic tragedy to happen, but the way we live our lives, the way we eat, it would be a surprise if these kinds of things didn’t happen,” he continues. “Not to make it sound like we predicted this; this is based on science and past case studies. It’s just that as human beings, our consumption of things has gone up so much the meat industry has lagged behind. We are still using such an outdated model that is not meant to support the population we have today.”

Still, Yeung sees hope in Hong Kong, where there is growing awareness that people should eat less meat.

According to independent surveys Green Monday Group commissioned, in 2014 only 17 per cent of people in Hong Kong knew about the Green Monday practice, in which people specifically don’t eat meat that day. That has grown to 46 per cent this year. More Hongkongers are becoming flexitarian, willing to try vegan products: only 5 per cent said they were willing to try plant-based protein in 2008; today, 35 per cent, or 2.5 million people, say they would give it a go.
The Omnipork products were developed in Canada and produced in Thailand for easier distribution in Asia to countries including China, Taiwan, Singapore, and Thailand.

Currently the Omnipork Luncheon and Strips are available only at the Kind Kitchen restaurant in Green Common’s flagship store in Nan Fung Place in Sheung Wan. They will be available for retail in July for about HK$40 per pack.