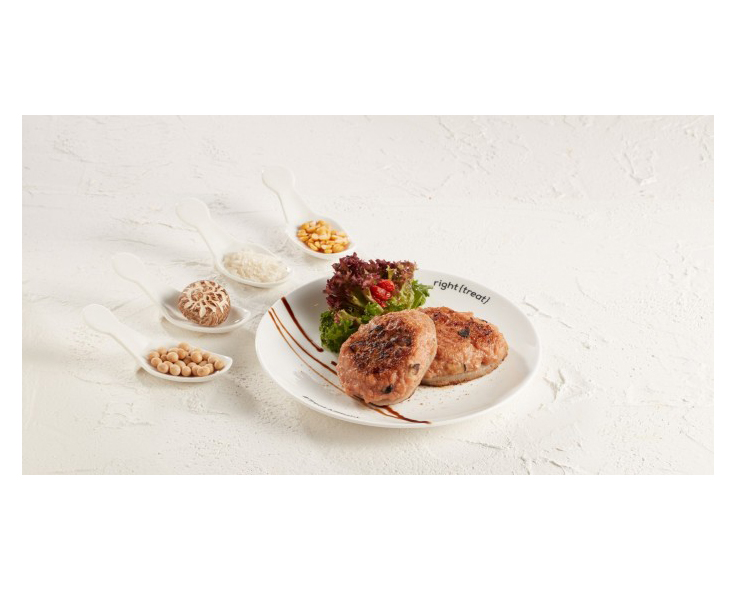 The company is encouraged by the skyrocketing popularity of Beyond Meat, a Los Angeles-based veggie burger maker whose shares have risen more than 600 percent since its initial public offering in May this year.

Right Treat launched its first product Omnipork last year, which it says provides the same flavor of traditional pork but is healthier to eat and more sustainable to produce.

It is made of shiitake mushroom, non-GMO soy protein, pea protein, and a mixture of rice.

Since its founding, Green Monday has designed and launched a plant-based menu that is now available in hundreds of restaurants across Hong Kong and has made its way to over 40 countries around the globe.

The venture works with companies, schools, universities, and governments to advocate a vegan diet on Mondays.

Yeung told 36Kr in an interview that an investment fund under Green Monday invested in Beyond Meat five years ago, which has now yielded “dozens of times of returns”.

Right now, most plant-based meat products, such as “Beyond Burger” from Beyond Meat, come in the form of “beef”.

But he said plant-based “pork” is more suited to the Asian palate than vegan “beef” and “chicken”.

In fact, pork consumption is much higher than that of beef in the region. In China, 65 percent of meat consumption involves pork.

“And we must adhere to the existing dietary habits of consumers in the market when we are promoting the new plant-based meat products,” Yeung said.

Right Treat has launched Omnipork in Hong Kong, Macau, Taiwan, Singapore, Thailand, and several other markets by partnering with local restaurants, which introduced the product to their customers by using it in such dishes as xiaolongbao and sweet and sour pork.

Omnipork is also available in retail stores and supermarkets; a 230g bag of Omnipork sells for HK$43, which is lower than the price of traditional pork of the same weight. The retail price of pork has soared since May this year due to the impact of the African swine fever on pork supply.

“The turning point [for Omnipork] has come earlier than expected,” Yeung said.

With the advances in technology and the increase in production scale, prices of plant-based meat products will definitely fall in the long run. “Then consumers will focus more on product quality when picking their choices,” he said.

Omnipork contains only about a third of the calories and saturated fat in traditional pork. It also has higher amounts of fiber, calcium and iron, and no antibiotics or hormones.

Interest in veganism is soaring, especially among Millennials. According to market studies, about half of the British population has adopted the semi-vegetarian diet, also called “flexitarian” diet, which is plant-based or with the occasional inclusion of meat.

The trend is also sweeping Hong Kong.  “In 2008, flexitarian diet accounted for about 5 percent of the city’s population, and it has quadrupled in eight years, surging to 23 percent, or nearly 1.8 million people, as of the end of 2018,” Yeung said.

He believes that Hong Kong and the mainland basically have similar food culture and tastes.

One of Right Treat’s major goals is to help China cut back on pork consumption. The company is now partnering with Chinese enterprises, schools and other institutions to promote a vegetarian diet and green lifestyle.

It has also teamed up with several restaurant chains and retail stores in the mainland, especially those identified with the younger generation, to promote meatless products.